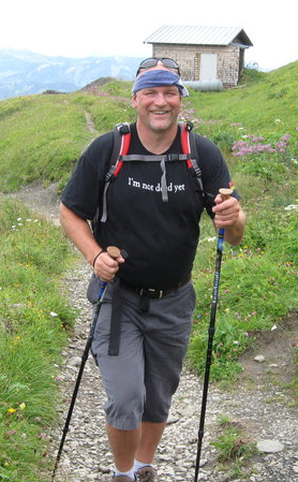 Hi my name is Dave Vickery and I currently live in St Kew Highway ,just outside Wadebridge. I am 49 yrs young but still only 15 yrs inside!  I am currently a Police Sgt with the Devon and Cornwall Constabulary based as a Neighbourhood Sgt at St Blazey nr St Austell and like to think of myself as the local Sheriff! Unfortunately without the gun and holster.

I am married with two children Luke 15yrs and Alice 13yrs.My  interests besides Scouting are Rugby (currently coaching Wadebridge Camels u16), anything Outward bound orientated and being an unpaid taxi driver for my offspring!

I am a former member of the 3rd Old Colwyn Scout Troop which is in North Wales on the coast.  I have very fond memories of my time there as our playground was the Snowdonia National Park.  At least once a month a group of us would be up in the mountains either walking/climbing or canoeing with frequent camps and mini expeditions all year. “Skip”  our infamous Scout Leader was a postman by trade and could out walk ,out talk and generally out perform even the fittest of us even though he was well into his 50’s at the time, but he served as a great inspiration to us all.

I  attended several Jamboree’s with one that stood out in Bangor North Wales in the summer of 1975.  A freak storm hit us one night and anybody who hadn’t pitched a tent right was in trouble.  I awoke in the night to the sounds of screaming from some German Scouts pitched next to us whose tents had tried to fly away with the poor lads still hanging onto the guy ropes!   We, of course, helped them out but couldn’t help laughing.

I left Scouts at 16 and then spent the next 10 years either in cadets or in the RAF where I served as gunner in the RAF Regiment. I was posted to Belize, Scotland ,Germany and ended up in Brize Norton Oxford. During that time I acquired a  lot of outdoor knowledge from survival training to field craft and was involved in the outward-bound training for my Squadron. These are skills I  like to pass on through Scouts and since my son Luke has been involved I have taken a keen interest as an assistant/helpful Dad. Through the Scouts I have obtained my Dartmoor Leader certificate and am currently an Assistant Leader with the Explorer Unit for Bodmin and Wadebridge.

I  am hoping this year to train some teams up for the Ten Tors challenge  and am currently awaiting my allocation from the Organisers.

I see so many troubled youngsters in my work and this challenge will hopefully show me what a well directed and motivated bunch of young people can do, given the right chance.

That’s where I see myself, helping to give young people a chance to prove to themselves and to us that they can utilise their full potential and show others what can be achieved with the right direction.

Looking forward to meeting you all and seeing what you are made of!