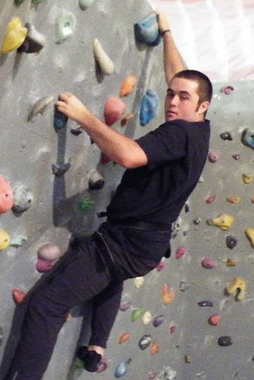 My name is Nathan and I live in Truro. I was born and raised in Cornwall and although I studied vehicle maintenances at college I eventually decided to follow a career in the maritime industry as a Surface Finisher with Pendennis Shipyard in Falmouth.

I joined the Scouting Organisation as a Beaver and I have been in Scouting ever since, recently joining Stenak Han Mor Explorer Scout Group as a leader.  Scouting has presented me with the opportunity to go hiking in many parts of the U.K. including Cornwall, Scotland, Wales and the Peak District.  I have also completed both Bronze and Silver D of E Awards.

The highlight was attending the 21st World Scout Jamboree in England then going on to Sweden for a week to enjoy home hospitality.  The swim in the lake after a long hot flight will always be remembered and appreciated.

Whilst in Scouting I also joined the Sea Cadets at an early age before transferring to the Royal Marine Cadet Corps where I remained until the age of 18.   I continued with the Cadets as a voluntary uniformed member of staff and I now hold the position of Detachment Commander.

Being Cornish I have taken full advantage of living close to the sea both above and below the waves.  Over the years I have successfully completed training with RYA as Competent Crew, Day Skipper, VHF Inshore Radio Operator and Levels 1 and 2 in both Sailing and Power Boating.  I also enjoy spending time under the water as a Qualified Advanced PADDI Diver.

My time spent with the Young Archaeologist Club in Cornwall has left me with a lasting interest in the past and adds a whole new dimension to hikes across the moors and visits to both historical and pre-historical sites, including a trip to Herculaneum in Italy.

I have always enjoyed a wide variety of outdoor pursuits ranging from Horse Riding in Cornwall, Canoeing in France, Skiing in Austria, Snowboarding in Italy and attending an Outdoor Adventure Centre in Bavaria.  I also have a keen interest in the Korean Martial Art of Tae Kwon Do where I have reached the level of Green Belt.