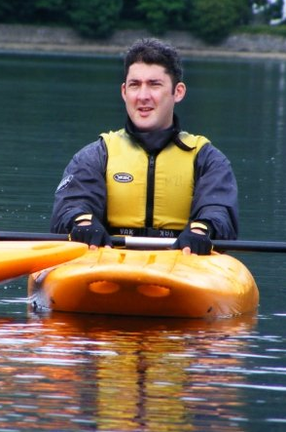 I was born in Redruth under a wondering star, (I didn’t have 3 wise men as they couldn’t find any in Redruth) young, bald and toothless and couldn’t speak English or walk.

At the same time I joined my local Scout group 1st Camborne as a Cub at the age of 8 and moved through the sections. My youthful years with this group were amazing. We camped abroad in France which was my first time in another country. We stayed in Brittany where we did various activities and joined up with the local Scout groups. We saw sights like the Karnak stones, which make Stonehenge look small and insignificant, met great new people and tried to speak French, with not much luck as my language skills are poor as you remember!

Also we did a canal boat trip, and more memorable we went to Villa Park to watch Aston Villa play Plymouth Argyle - this was a fantastic trip. For some of the Scouts this was their first time to a big city like Birmingham and to a huge stadium like Villa Park!

While in the middle of my time in Venture Scouts I joined the RAF and moved away from Cornwall, I spent 12 years in the RAF where I had some amazing times and got to go to some amazing places like Washington DC, New York, Canada, Majorca, Corsica, Norway, a lovely trip to the Falkland Islands and try amazing things like skiing, rock-climbing and mountaineering. I also made some lifelong friends.  It all sounds a bit like Scouting!

My last posting was to RAF St. Mawgan, near Newquay, so when I moved back I rejoined my old Scout group as a Venture Scout leader it was great to give back to the group that gave me so much as a young person! After a couple of years they decided to get rid of Ventures (the fools!!!) and I became the Explorer Leader for the group - I say Explorer Leader, I had 2 Explorers!

On a district camp in Bristol, I was ganged up on by a few of the Explorers and the DC and was asked to become the DESC. I must have banged my head caving as I said yes! So for the last 6 years I have been the DESC for Stenek Han Mor district. Over this time I have got the Explorers surfing, went down a tin mine for a ghost tour and done an annual camp in February called “Frosties”, where some years the only stuff not frozen was the food in the freezer box! We have also been to Exmoor on expedition 3 years in a row and we went to Scotland on an adventurous activity camp!  Every year we do our Christmas Santa Claus night hike, an amazing sight seeing over 15 Santa’s hiking over Carn Brea. I now have over 30 Explorers!

My great claim to fame is that I was on Total Wipeout. If you want to see me make a fool of myself on national TV just look on Youtube for Series 3 episode 2 or series 3 awards.

I look forward to the Explorer Belt Eexpedition to the Czech Republic as this is an amazing experience for them and one of those activities they will look back on for the rest of their lives! I was lucky enough to do lots of activities in my younger scouting years and I am very grateful for the memories.